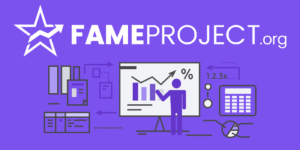 People are constantly making predictions in their daily lives, whether it’s trying to foresee traffic times or contemplate the arrival of their shipment. And who among us haven’t debated the latest entertainment or sports news with friends over drinks? What if there was a way to actually make money from your predictions? The new wave of the future to make predictions while earning money has arrived through Fame Project.

With the celebrity-studded event of the 90th Academy Awards, as in all years, brings in endless guesses of the potential winners. Will The Shape of Water win best picture, or will Greta Gerwig’s directorial debut, Lady Bird take this win? If you already have heavily backed predictions or simply a gut feeling about the winners, then why not make extra money? You can make a prediction by buying shares that vary from as little as 1 cent to 99 cents. If the prediction is accurate, then you’ll make a profit and if not, the money will help fund research and educational purposes.

Fame Project users can now make predictions on seven Oscar categories: Best Picture, Best Leading Actor and Actress, Best Supporting Actor and Actress, Picture with Most Wins and Best Director.Users can predict whether nominees will win in their respective categories, such as whether upstart Greta Gerwig will upset Guillermo del Toro for Best Director.

“People now have the opportunity through prediction markets to put their money where their mouth is and prove they knew who the winners were all along,” said J.S. Wagner, COO of Fame Project. “Now, with Fame Project, film aficionados who feel strongly they can accurately predict who is going to win the Oscars can make their predictions with real money.”

Prediction markets were introduced as early as 1988, and since then, they have grown significantly to encompass various topics of interest. Prediction markets have great value as they aggregate information and offer the “wisdom of the crowds” to research and educational efforts. The predictive analytics market size is expected to grow from USD $4.56 Billion in 2017 to USD $12.41 Billion by 2022. The predictive analytics market is expected nearly triple in a few years because of its rapid expansion into various markets and its growing importance. Fame Project is a groundbreaking new site, currently expanding the scope of research for predictive markets. Fame Project is the only prediction market actively collecting data for research outside of politics, economics and finance.

The predictions are not limited to the Oscars, because Fame Project offers various other open markets such as: National Football League (NFL) and Major League Baseball (MLB) free agency, the NFL Draft, Tiger Woods and Professional Golf and even Reality Television. Fame Project will continue to expand the quantity and types of contracts offered for trading.

Fame Project is the only prediction market in the United States where participants trade real money on pop culture events and news. Its mission is to provide much needed data and funding for social scientists to study the public’s perception of, and engagement in, popular culture events and news.Besides generating useful data, Fame Project also generates revenue which is used to fund research grants. Not only is Fame Project an entertaining platform for users to profit from their accurate predictions, but it also helps fund research for educational purposes. Making money while doing good, what a concept! My prediction is the Fame Project has a bright future ahead of them.

5 Health Hazards of Having Pests in Your Home

How to unlock Samsung Galaxy S9