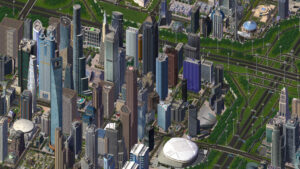 It might be called a game, but there is a lot of science involved in simulation games.

Take a look at one of the world’s best selling, independently produced video games, Minecraft. It’s a game that gives players the opportunity to build their own environments. It might seem as just a game at first glance, but on a closer look, you will realize that you are doing something bigger: planning a completely new world.

There is a lot to be learned from simulations, to be successful you have to have foresight and plan your actions carefully. You usually will first recognize a bad decision when it is far too late to change it. You learn to plan carefully and always consider the effects a decision can have on the long run.

The best, and most popular, example of didactic simulations is City Building Games. For some they are just a cool way to kill time, but to others, it is far more than just a digital game. Have you ever taken your time to look at how your city is planned? Why is a public park at its current location? Why aren’t there enough schools in this district, or why is there always traffic on the bridge?These are questions you come to think about when you take a closer look at your city.

So what if you could be provide the solutions through a game, instead of complaining all the time. What would you do? Where would you put the main street? Where would you locate your school, the public park or the sports arena in your locality?

Power does not always equal control

City building games do more than give you fun. They educate you on not just how cities are built but how they are run.

Through these games, you get to make crucial decisions in industry location, transportation, energy, crime prevention, and economic growth; a small misplacement, and you are bound for failure.

Having the power to build anything you went, anywhere you want and at any time you want, does not automatically mean that you have control over everything. If you have ever played SimCity, or the likes, you know that a lot of things can go wrong.

For instance, you will get to learn that building factories near residential places brings a lot of health hazards. You also get to learn that poorly constructed streets create congestions, making people’s lives difficult and spoiling your “game”.

City Building Games often give you insight into how the masses behave, as mentioned before, there is often a lot of science put into these games. You will realize that your citizens might take different routes to different locations. Citizens might use one route to work and come back through a different one. Many go to the market after work, and then go home, completely not doing what you had planned.

Everything has an effect on something, the routes mostly used by citizens, where these routes lead to, and the kind of transportation used are all factors that impact the free flow of traffic – and you get to learn all that through a city building game.

It is still only a simulation

Remember that playing a city building game doesn’t make you a city planner, an architect or even an urban planning professional. However, these games can give you the opportunity to ponder about where routes lead to, where people go, and how the movement of these people affects your city’s development as a whole. That is what you can gain from this as ‘just’ a game player.

Real city planners might not have any practical use for simulation games, but theyare most probably not wasting their time, if they should play, either. They could get a better grasp of how cities work and function. This can help in giving them different perspectives and views on urban life, maybe helping them make better, future decisions.

The next time you play SimCity, Skyline, or Minecraft, don’t just think of it as playing a game, you have the power, use it wisely.

Accounting Tips for Running a Website for Passive Income

How to decide which drone is best for you