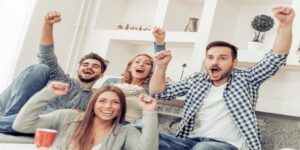 When Timothy (not his real name) bought his Mega Millions ticket online on Lottosend.com, it was just another one of his many trials to win some money in the lottery that has taken America by storm. Little did he know that this was his lucky day as the ticket bore fruit and won him $29,396!

“I still can’t believe that I won. It may not be a million dollars, but this is still a huge chunk of money that will definitely change my life” Timothy said.

The 43 year old man has been doing freelance jobs for several years now after he was fired from his previous one at a local company and says that the winnings will make significant changes in his life. Timothy lives in Europe and has been trying his luck in the Mega Millions lottery for months and at last he has something to show for it.

“I bought my ticket online from Lottosend.com and used birth dates of members of some of my family members”, Timothy added. “I used to allow the computer do the number generation for me, but this time I decided to do things differently”

Asked about what he plans to do with the $29,396, Timothy said that he is yet to decide on what he will do. He, however hopes to start a business that will in a few years grown into a reputable brand. Being a professional marketer, it is probable that he may set up a marketing firm but the decision is yet to be made.

“I will of course use a little money on upgrading my life, but a large sum will be set aside to start up a business when I have decided which way to go” Timothy said.

His wife works as a teacher and their three children are still in school and Timothy feels the winnings will be a great boost to his family in general. Considering that this is not a jackpot win, the amount is expected to be paid out in a lump sum which is welcomed by the winner.

Asked whether he plans to continue playing the lottery, Timothy indicated that he is now more motivated to continue until he wins the jackpot at some point.

“My $29,396 win has come as a great motivator for me and I do not intend to stop here. I will continue playing the lottery until I win millions in a jackpot! I am all fired up!” said Timothy.

In Mega Millions, players pick a total of six numbers from number pools provided and the jackpot is won when all six numbers are matched in the draw. The winnings range from a few tens of dollars all the way to millions depending on the ticket plays selected and the number of numbers matched. The prizes paid out based on sales and number of winners in California whereas in other states the payouts are according to pre-determined numbers.

A single one time play ticket goes for $6 on Lottosend.com and jackpot winners have the options of having annuity payment or cash payment. In annuity payment options, the winnings are spread through a number of years for protection purposes whereas the cash payment involves the payment of all winnings in a lump sum; it all depends on what option the winner feels is best.

In America Megaplier is a feature worth mentioning when talking about the Mega Millions Lottery. Most states enjoy this feature which increases the non-jackpot prizes by up to five times. By paying an additional $1 per play, players stand a chance to increase winnings when the megaplier is drawn. The balls in a pool of 15 come marked with the 2X, 3X, 4X and 5X, so the values are easy to tell for those who choose the megaplier feature as they play.

Advice to other players

Timothy the winner of $29,396 tells other expectant players that the best way to win is to never give up. Having tried the lottery for several months without much luck, he says that he never gave up, but instead believed that his day would come.

“It can get frustrating when nothing seems to come your way, but when you are inclined to winning, you cannot afford to give up”, he said.

Many lottery players give up on trying after playing a few times with nothing to show for it. Mega Millions tickets are quite affordable, especially compared to what they stand to win in the end. According to Timothy apart from being persistent, it is also important to try and not put your whole life into the lottery. It is best that the lottery is played as a hobby; you should have other things going in your life to generate income instead of waiting on the winnings to get your life going.

“When played as a hobby, it becomes very easy to deal with frustrations when your tickets do not reward your efforts” added Timothy. “I made a point of playing without expecting anything much and hence even when I failed to win anything I did not lose my motivation to keep going”, said Timothy.

It is also very important for players to be careful with where they buy their tickets for the Mega Millions lottery. It has become very popular and scams have unfortunately also sprung up with the popularity. Buying tickets online is very convenient because you can do it anytime, anywhere and also be able to check the winning numbers as per your convenience. However, if you are not careful with the site you choose to buy your tickets from you could end up being conned.

“I bought my Mega Millions ticket from Lottosend.com. It is a site I have used many times in the past and I can recommend to other players” Timothy said. “It has amazing features and is an easy to use website, whether you are just starting out on the lottery or have been playing for some time”.

Timothy is indeed a very good example of what patience can do and how Mega Millions can change lives in a flash!

Learn more about lottery games that you can play online at Lottosend here.

How to Know When to Call the Plumber