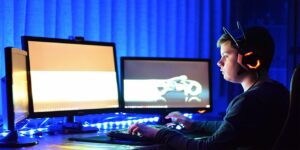 Free-to-play has become the dominant business model in the video gaming sector and these titles earned their developers $87.7 billion in 2018. To put that into context, traditional games like FIFA 18, Call of Duty: Black Ops and Red Dead Redemption 2 earned just $17.8 billion.

The bestselling paid-for game of 2018 was Player Unknown’s Battlegrounds, and it responded by going free-to-play in January 2019. Another stalwart of the traditional gaming sector, Counter-Strike: Global Offensive, also went free to play in December 2018, as developer Valve finally caved in.

It sounds counterintuitive, so how exactly do these free-to-play games make so much money? The key to their success lies in the often murky world of microtransactions.

Asian games pioneered this model throughout the late 1990s and 2000s, as they gave away their content for free and then charged gamers extra to unlock various skills, items, and cosmetics. Riot Games can largely be credited with bringing it to the western world as the economic model for League of Legends, released in 2009.

They wanted to build up a strong community of gamers from scratch, so they went for the microtransaction model. They were adamant that gamers would not be charged for the skills that others would have to earn through blood, sweat, and tears, so instead, they charged mainly for cosmetics that could personalize the gaming experience for the gamer.

It proved to be a remarkably successful model. A decade later, LoL remains the most popular game in the flourish esports sector, as evidenced by the Twitch user stats and its prominent position at Unikrn. In 2017, it made $2.1 billion for Riot Games. That dropped to $1.4 billion in 2018, but it is still an economic powerhouse.

Yet Asia still dominates this market: it accounts for 62% of the global spend on free-to-play games, according to Nielsen SuperData. Seven of the top 10 most successful free-to-play titles last year were owned by Asian publishers: Dungeon Fighter Online, Crossfire, Honour of Kings, Fate, Candy Crush Saga, Monster Strike, and Clash Royale.

The three exceptions were Fortnite, LoL and Pokemon GO, which placed first, third and fourth respectively. Fortnite, the outrageously popular battle royale title, led the way with $2.4 billion. That broke a record previously set by LoL in 2017 for the most money a single game had ever made in a calendar year.

Most free-to-play revenue comes from mobile and PC, but Fortnite’s presence has ensured that consoles are also getting in on the act. Fortnite players are charged a fee to choose a costume, known as a skin, for their character to wear, and they can also purchase add-ons like tools and weapons. Fortnite also sells a Battle Pass for $10 per quarter, which gives the player a higher level of access to updates, mapping changes, new character features, and some missions.

It even has its own digital currency: 1,000 V-bucks are equivalent to $10. You do not have to pay for the extras, but they do heighten the gaming experience, so there have not really been many grumbles from the community. A 2018 study from Ledelu found that 68.8% of Fortnite players have spent money on in-game purchases. The average amount they spent was $84.67.

The Battle for Supremacy

More than 250 million people have downloaded Fornite, so we are talking about at least 172 million people spending $84.67 – which is higher than the cost of a AAA game like Call of Duty or FIFA – showing just why this economic model has proved to be so successful.

Fortnite is now coming up to two-and-a-half years old, and its popularity is starting to dip, but developer Epic Games is pumping $100 million into esports tournaments in 2019 in order to retain market share. This has generated a great deal of excitement and interest in the community and stopped gamers defecting to competitors like Apex Legends.

More than 40 million entered qualifying for the inaugural Fortnite World Cup, hosted in New York City this summer, and you can safely assume that they were paying for the battle passes. Epic is likely to continue funding a lucrative competitive scene for Fortnite as it bids to enjoy the sort of longevity that LoL has boasted.

Earlier this year, LoL reclaimed its title as the most popular game for viewers, overtaking Fortnite. The likes of Dota 2 and Overwatch follow this free-to-play model and they will help it continue to flourish.

Not all publishers get the microtransaction model right. EA sparked fury among gamers over its use of in-game transactions when it launched Star Wars: Battlefront II. It is worth noting that this was a classic, paid-for game, as these titles also make money from microtransactions. EA Sports, for example, makes a fortune by selling Ultimate Team lootboxes.

Yet this time, EA got it seriously wrong. Players said they were “disgusted” to find that they could not play as some of their favourite characters, like Darth Vader, without forking out extra through microtransactions.

EA’s response was to remind them that they could unlock the characters by playing around 40 hours of game time and unlocking the necessary Crystals – the in-game currency it adopted – as opposed to simply buying the Crystals for $100.

Developer CD Projekt Red, which is poised to launch the eagerly anticipated Cyberpunk 2077 in 2020, said it would have “no hidden catch, you get what you pay for – no bullshit, just honest gaming… We leave greed to others.”

The microtransaction model will not go away, but developers have to think very carefully about how they make money without seeming too mercenary. It is a delicate balancing act. For the most part, LoL, Dota 2 and Fortnite have pulled it off. The jury is still out on other games, like Apex Legends. But it seems that this is the economic model of the future for the gaming industry and it will continue to dominate for years to come.

The Popularity of Bitcoin as a Payment Solution

Beware of These Common Causes of Motorcycle Accidents