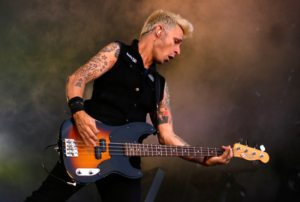 Last year, the anniversary of Quiet Riot’s Metal Health album hitting number one on the charts went completely unremarked, which absolutely shocked me. Yes, there have been way better metal bands that came after them, but Quiet Riot’s success opened the door for all of them. Without Quiet Riot and Def Leppard making metal acceptable to the mainstream, perhaps bands like Motley Crue, and even Metallica, would have had a much harder time breaking through to bigger audiences. (Then again, Metallica were always a much harder sell to the mainstream, and they didn’t cross over to every day audiences until the Black album.)

For those of us who grew up with MTV, myself especially, we all remember when Twisted Sister’s “We’re Not Gonna Take It” became a huge touchstone of the eighties. The band was struggling in the New York clubs since the ‘70’s, and they finally broke through with MTV’s help. I can still remember rushing to get home from school to see the world premiere of the sequel, “I Wanna Rock,” and it was absolutely one of those sequels that blew away the original.

Success didn’t last long for Twisted Sister. What MTV gave, MTV tooketh away, and the band’s follow up album, Come Out and Play, died the death of a dog. Eventually Twisted Sister were able to put aside their differences and reunite, and although they’ll never have the same success they did back in the day, they absolutely made their mark. Like Dee Snider himself told me years ago, when Green Day played Woodstock in ’94, they played a little snippet of “We’re Not Gonna Take It.” Even if the audience sang along as a joke, Snider was pleased to know everybody still knew the words.