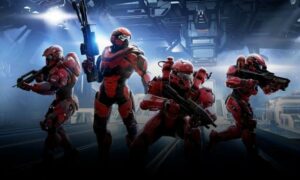 With so much talk about all the big blockbuster movies coming this summer, how can we forget about the blockbuster video games that will soon be upon us, like Halo 5? These days, when news of a new game installment hits, it’s similar to news leaking on the net about whatever big event movie will be hitting theaters.

So Game Informer tells us the full title for Halo 5 is Halo 5: Guardians, and some of it was shown last year at HaloFest, and the game is set to be unleashed on the world on October 27 on Xbox One.

As Game Informer tells us, there are changes in the Empire map, and it has “a never-before-seen map called Fathom,” which is an undersea base that looks incredible. “343 also teases a new multiplayer mode never seen in a Halo game before.”

The plot of the game is Master Chief and Blue Team are AWOL, and Spartan Jameson Locke has to track them down with his own team, Fireteam Osiris. Sounds cool?

Ultimately gamers will have the final say when Halo 5 is unleashed on the world, but it’s usually exciting when a the next Halo game is released, especially when you see all the work, technology, effort and money that go into it, again, just like a big Hollywood movie.