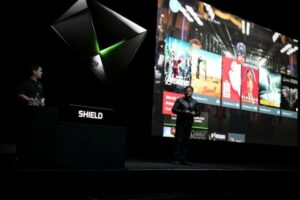 The Game console market was due for some kind of disruption.  Steaming was becoming far more viable and with Streaming you simply don’t need the level of performance, or cost, in set to box.  This was showcased when Amazon’s Fire TV hit the market with optional game controllers.  However with Fire TV gaming was secondary and still rarely used due largely to a lack of TV scale games for set top boxes.

Well this week NVIDIA announced their Shield Console as part of their Shield gaming trilogy consisting of a Smart controller with a built in screen and their gaming tablet.  I have both of the earlier products and have come to appreciate this model.  I think it will eventually define the gaming segment.

Back in the 1990s there was a ton of work done to determine what people would pay for a gaming console.  As part of this process a model was developed that showcased that at each break point the potential audience for a game system went up nearly a magnitude at least down to $100 and after that folks tended to think the product was junk.   It made for a rather strange looking demand curve.  It looked like a bell cut in half.

Strangely since that work was done game systems, with the exception of some Nintendo efforts, seemed to push for higher prices with the Play Station 3 being almost at insane levels.   You may recall during the Play Station 3’s tenure both Microsoft and Nintendo passed it in volume largely because they were at vastly lower price points, something that eventually Sony addressed and their sales have improved as a result.  Nintendo just lost track of their market again and that had nothing to do with price.

But even so the magic price for game systems was, and for what I’m seeing anecdotally, remains about $200 which is where the market wants to buy these things in mass and where there is still enough cost room to create a pretty decent product.

The other big change is that unlike early last decade most of the games that are being developed are being developed for mobile systems.  And these systems are increasingly supporting HD, Quad HD, and 4K resolutions.   Two of these are stronger than what even the high end game consoles can support natively today.   This means that not only are there more games coming to market on Android and iOS but they are increasingly able to be put on a large screen and still look great.

However most of these games are still touch optimized and really designed around the concept of a small screen.  But with the proliferation of wireless controllers for Tablets and NVIDIA’s other products, there is an increasing number of games that play very well with a controller and without touch.

With companies like OnLive and Mainframe2 the ability to stream games from a service like Amazon Web Services is moving aggressively in the market and the games being streamed are often top PC titles.   Streaming allows these high powered games to be able to function on low powered hardware and provide an unprecedented experience on a mobile device.

Currently with NVIDIA’s Grid Gaming service which runs on Amazon’s platform they are providing over 40 top games to their existing shield products and with a strong internet service the experience is actually damned good.

I should add that one of the features that NVIDIA didn’t talk about was Game Stream or the ability to stream games from your own PC.  Ironically some folks actually think this little known feature is the products biggest advantage.

This brings us to the Shield Console which pulls all of this together into a fascinating product.  It costs under $200, it runs Android and will play the same controller enabled games locally, and it also connects to NVIDIA Grid and will play the titles currently being offered on NVIDIA’s other Shield products.  Finally NVIDIA is re-mastering a host of legacy games which should add significantly to the gaming experience and provide a critical mass of games.

This basically reverses the Amazon Fire TV box in that rather than being optimized for TV but also able to play games, it is optimized for games and also will do TV.  It is more expensive but that is always the case when you optimize on performance.

This is potentially a very disruptive device but also likely only a stepping stone on the path to what is coming in the future.

Wrapping Up:  Changing the Future

What we are witnessing is the changing of the future.  And eventual massive move from playing games locally to streaming them from the Cloud.  This has always had huge potential for MMOs because the processing power and close proximity of the cloud resources should lend themselves far better to truly massive multi-player experiences far better than the distributed model we have today.

NVIDIA showed us the future of gaming on TV this week at the GDC, let’s see how long it takes for us to truly get there.

4 essential things to know about being an entrepreneur in your 20s!