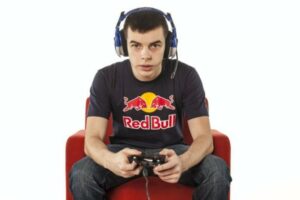 Who wouldn’t love to play video games for a living, especially if you were getting paid by the hour?

The New York Times just ran a report about Matt Haag, a pro gramer who goes under the name Nadeshot, and who also makes nearly a million bucks a year playing games. Nadeshot is part of the OpTic Gaming team, and he makes a very nice living playing Call of Duty where several years before he was working at McDonalds.

Nadeshot reportedly has 1.5 million YouTube subscribers who watch him play games via live streaming, and he also tours gaming tournaments. He’s sponsored by Red Bull, and as the Times reports, he’s “the face of the growing business of video games as a spectator sport. Thanks to live tournaments and online video-streaming sites like Twitch, which Amazon bought for $1 billion in August, video games have become something to watch, not just play.”

While we may never see gaming at the Olympics, it’s a trip that tournaments have been going well across the country, and that you can turn playing games into a lucrative living like this. Who wouldn’t love to go to work playing games for millions instead of doing 9 to 5 for chump change? If you’re lucky enough to do it, God bless ya.