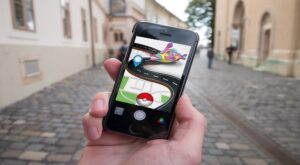 This sci-fi themed first-person shooter game features spinetingling space zombies and more jump scares than a Freddy Kruger movie. Updated earlier this year, the game is one of the most popular around. Maybe it’s down to the 20-hour single player campaign or the in-depth character development that’s more in keeping with RPG games than shoot ‘em ups. Either way, you’ll be entertained for hours!

This racing game is about as realistic as it gets. Featuring upgrade after upgrade the newest instalment of the game allows you to sit pretty behind the steering wheel of a Le Mans Ford GT. You can add upgrades galore, but be warned, it uses an in-app purchase system so keep a close eye on your spending, those engine tweaks are addictive.

From something realistic to something a little more relaxed. This cute animation style game has simple gameplay and colourful graphics for those more interested in fun than oil changes. You race up and down hills against your opponents, customising your cars to make them behave differently. You can also unlock achievements and play in multiplayer mode too. A game you’ll find hard to put down.

Last updated this year, this multiplayer network game has been adapted from the Nintendo DS game and has all the great features of the original. The aim is simple – get revenge on your father’s murderer and keep the empire for yourself. It’s exciting, action packed and has that usual GTA grit.

Take part in this magical Warcraft game to lead your clan to victory in an epic adventure. You can earn and trade armour and weaponry, chat with thousands of other players and customise your characters. All for free, too!

This classic game from EA Sports has made its way onto a mobile platform and has all the excitement of its console version. Multiple gaming modes and top-notch graphics mean you can live out your childhood dreams of scoring ten past Man United – even if your football skills are more Emile Heskey than Neymar.

If you’re looking for a way to improve your poker skills then give Poker Offline a try. There are over 1 million people playing this app every day, and the bonus is you don’t need internet connectivity to do it. Ideal if you’re stuck in a train carriage for a couple of hours!

The five-reel isis slot has a classic Egyptian feel with mummies, scarab beetles and ankhs all making an appearance. With a gamble feature and free spins bonus you have the chance to really clean up. There’s even a six-time multiplier on every free spin to increase your bank balance. Check it out today!

Ever dreamed of owning your own theme park? Well, with Rollercoaster Tycoon you can. Add all the loops, twists and turns to make a stomach churning coaster of your dreams without the added side-effects of throwing up your lunch! Very addictive.

This newest instalment of SimCity uses touch screen technology to bring their immersive world to life. Moving on from simply adding hotels and skyscrapers, you can add world famous landmarks, marinas and cargo transportation. A great way of escaping for a little while.

Released this year on Google Play, this Orangepixel action-packed platformer features randomly generated levels so no two games are the same. Copying the pattern of the classic Spelunky game but with a sci-fi twist, your hero uses bombs to blow up his environment. Loot is randomised and bad guys get stronger after you’ve hung around on a level too long. A great option if you’re into fun, light-hearted platformers.