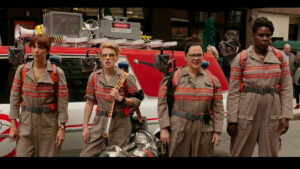 Nostalgia is an awful glue. It deters almost anyone from moving on, evolving in their tastes. That’swhy social media is always abuzz with stories about ‘remember this’, ‘rememberthat’ and constantly bemoaning a time in the past. And this is the samestuck-in-a-time-zone feeling that made everyone go ‘Spartaaa’ when theGhostbusters reboot was announced with all female cast. The fans bared theirclaws and fangs, hell-bent on making the trailer the most disliked in Youtubehistory.

Well, here’s the deal. To smack your sexist faces, the new Ghostbusters actually defies your negativeexpectations and emerges as a film that’s sparkling, curious and constantlyhilarious.

Since I revisited the original to refresh my memory, and also for the sake ofcomparison, I faced an uncomfortable truth. The original might be safe in thecushion of memory, but a relook doesn’t justify its reputation as a classic.

One of the reasons why the original struck a chord with millions because it had a comic spine that was sly and relaxed even in the face of a horror, something that defined the trajectory of Bill Murray’s persona.

But Murray fashioned better characters later, and his Peter Venkman doesn’t havethe charm of his other famous roles. No, Sigourney Weaver’s DanaBarrett doesn’t have much to do either.

The original team of Ghostbusters.

But the reboot takes a cue from the original, and makes all the correct steps. The jokes fly outward, many very openly taking a dig at the haters of the idea of a female reboot. The format of the film is the same as the Ivan Reitman original, giving us a quartet who start with catching ghosts in New York city, followed by boos and whoas, and finally saving the cityscape from a supernatural apocalypse. The same nonsensical fun. So when Erin Gilbert (Kristen Wiig), a physicist suddenly discovers her former best friend, and horror conspirator Abby Yates (Melissa McCarthy), her career goes downhill, but hey, the best buds find another career in conviction that ghosts are real, and ghost-catching can be a serious business proposition. With Wiig and McCarthy, current Saturday Night Live stars Kate McKinnon and Leslie Jones join in, and we have a whole new gang. Yes, haters can take a walk.

This is the perfect example of a film that shouldn’t be judged on the basis of its trailer. Because most of the punches of the film actually emerge out of the chemistry that the four women share, an exercise in behavioural comedy.

If you take out the context, the jokes would die a terrible death, but they leap out of the screen to make you laugh because in milieu, they are at home with the characters. The original wanted to celebrate the male ordinariness, following the trend of films of its time. Director Paul Feig is reluctant to make the women mediocre. They are capable, they know it, but like you and me, they need to assure each other what they are skilled at.

Feig does fan service but never at the cost of the film. So you have many cast members of the original popping in here and there, the familiar logo to well-known ghosts, but the film has the desire to stand on its own feet, with a self-aware wink.

The original never relied on special effects because it was happy being just a comedy, but this one goes one step ahead to make the special effects gigantic, and turn a famous comedy film into an action comedy.

The action scenes in the climax are actually of blockbuster standard, and a scene in which McKinnon turns into Wonder Woman battling evil ghosts with her lasso is a stuff of future legend.

Beginning in a century old mansion and ending in a modern high-rise, this is a film that is funnier than the original, and deliciously scary. There are several brilliant gags in it, the best being Chris Hemsworth’s Kevin having a dog named ‘Mike Hat’, doffing its hat to the Abbott and Costello tradition.

The women do not talk about babies, romance or make-up. Reversal of fortune, eh? Interestingly, the sexism the film wishes to address by going all gender bender, it does reduce its male members into evil, dumb or plain indifferent. A victim of it’s ambitions? May be, but the male bastion has no right to complain of oppression when it’s just budding. Let it continue for another century of movie traditions, then we can talk. Till then, book your tickets and cheer for the ladies.

(The writer is a journalist and a screenwriter who believes in the insanity of words, in print or otherwise. Follow him on Twitter: @RanjibMazumder)