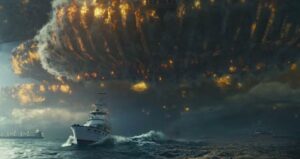 I am a big fan of the first Independence day movie and I liked Roland Emmerich’s world destroying movies “2012” and “The Day After Tomorrow”. That said I have been anxiously waiting two decades for the sequel to the original 1996 Independence Day. A lot of people, mainly journalists, were quite disappointed (to say the least) that there was no pre-screening. After what happened to Batman vs Superman I wouldn’t blame the studios if they never let critics see anything before release date ever again.

With all the sequels and prequels and in-between-quels coming out lately, I have made it a habit never to have expectations when I watch a movie for the first time, and that helps. “The Force Awakens” disappointed me and “Dawn of Justice” was a pleasant surprise, mainly because critics had said that it was soooo bad, and I really do not know what to say about ID: Resurgence.

I was expecting a lot, I am sure a lot of people tried hard to deliver, and obviously a lot of people did not try hard enough, because I didn’t get anything except a load of special effects and a lot of flat, emotionless dialogue.

The movie is as if the director didn’t have anytime to be on the set, the scriptwriters were underpaid and the actors were just fulfilling a contract they had signed 20 years ago. I am still a fan of Jeff Goldblum but there was nothing he could have done to save the story.

So many things didn’t make much sense in the movie, there far to many sidekicks and at the end (spoiler alert) the frigging (unharmed) alien ship just flies away, the thing was the size of a continent and it just flew away after being “defeated”.

Unfortunately the film was a disappointment and only worth watching for die hard fans of the genre, director, special effects or one of the actors, even then it is a disappointment. The characters that were left from the first movie,gathered in area 51 again with a few new characters and practically did what they did in the first movie in slightly different circumstances..

A Glimpse at The Aston Martin Vantage GT12 Roadster