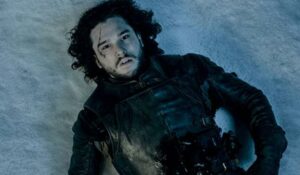 For fans who can not wait, the new GoT season 6 trailer is out.

We get a glimpse of all our favorite characters, even the corpse of Jon Snow, and it looks promising.

The coolest scene is Cersei Lannister “choosing” violence, apparently with the support and backing of the resurrected Ser Gregor Clegane.

Of course what would a GoT trailer be worth without looking for hints of Jon Snow being alive. Some believe that at the 1:17 mark, for a split second, you can see him involved in battle.

Take a look for yourselves.

The theme music – Wicked Game, from James Vincent  McMorrow is close to perfect. To tell the truth I had never heard of him before but now I am a fan. You can listen to the whole song below.

I found this recap/Intro from Videos Site, it is not bad. They have put a few scenes from the previous seasons together, giving us a picture of what we can expect.

If that is not enough, amazon has a discount on the GoT season 5 blu ray box at the moment, or watch it online.