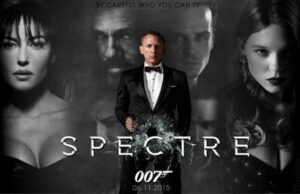 Daniel Craig’s fourth shot as the legendary James Bond, Spectre, is out and the critics can not decide if they liked it or not. The film tells the story of how a cryptic message from the past, sends Bond on a quest which eventually reveals the secret of a sinister organization called Spectre.

Rotten Tomatoes gave the film 65% positive reviews. Most criticized the thin plot, saying that Craig saved the movie but there was no real praise for both of them.

“The 007 franchise is in a much better place than when Craig first appeared as Bond in 2006.”

“Succeeds mainly as a series of dazzling set pieces connected by a thin plot.”

“Craig’s expression is so unchanging it might as well be chiseled out of stone, and his emotionally uninvolved performance is similarly lacking in nuance.”

“Besides Craig, the real star in Spectre is director Mendes, who has found the perfect emotional tone this time out.”

The audience critics on Rotten Tomatoes were not that enthusiastic either, with most of them saying that the film was a disappointment compared to Skyfall.

“It doesn’t hold a candle to Skyfall but then this is a very different film — albeit of a (now complete feeling) canon that began with Casino Royale. It does have the most spectacular, exciting opening of a Bond film so far however, plus scene stealing work from Ben Wishaw.”

“One of the great satisfactions of Spectre is that, in addition to all the stirring action, and all the timely references to a secret organization out to steal everyone’s personal information, we get to believe in Bond as a person.”

Looking through the English press, you get the overall impression that the film is good, with lots of good old fashioned Bond action, but maybe a pinch too much “YouTube mash-up” action, as BBC put it. The added portion of romantic in the movie has bought those involved a lot of praise too.

At the end of the day, if you are a James Bond or Daniel Craig fan you will and should watch the movie, and for the undecided, I think going to see Christoph Waltz is good argument too.

Will Blackberry throw in the towel?

From VR, to AR and Holography: The Emergence of Magic