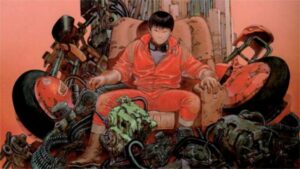 Akira is a  1988 Japanese  animated science fiction film directed by Katsuhiro Otomo. It was written by Otomo and Izo Hashimoto and based on Otomo’s manga of the same name.

The story centers on a  post WW III Neo-Tokyo biker gang, their friends, corrupt politicians, intrigues and psychic powers. Although the film was a big success under genre fans, lots of viewers acquainted with the original manga comics, were disappointed at the film´maker’s  attempt to squeeze 1800 pages into 120 minutes. Nevertheless the film has earned itself cult status.

The US rights to an adaption of the 1988 film, are owned by Warner Bros. According to Den of Geek, sources have said  that Christopher Nolan will make a Trilogy of the famous manga. It is not clear if Nolan will direct the remake (s), actually nothing is clear, but his name should attract other big names. It has already been said, that the film is being handled by Leonardo di Caprio’s  production company, Appain Way, the same company that worked together with Nolan on Inception, adding  weight to the rumors.

It has been announced that Nolan’s next movie is due in July 2017, the title is secret. Maybe it is Akira.

A home appliance that can count calories for you

The Saturn moon Enceladus could be an ocean world