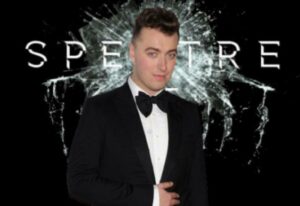 The new Poster for the twenty-fourth James Bond movie, Spectre, is out. It shows an elegant and confident-looking Daniel Craig in the front with probably a hint to the film’s opening sequence, set in Mexico at a day of the Dead celebration, in the background. It might also be a subtle tribute to the skeleton guy in Live and Let Die, I couldn’t help noticing the resemblance. The poster does break away from the tradition of showing the female protagonist, but that was also the case with Skyfall. Maybe a new trend.

Admittedly, I am a fan of Daniel Craig’s impersonation of James Bond more than I am a fan of the whole franchise but the title songs have always been something special, an important part of the  movies, giving each film its special character. Who can forget Shirley Bassey’s “Diamonds are Forever”, “Live and Die” with Paul and Linda McCartney or more recently Adele’s “Skyfall”.

On Tuesday, the four Grammy and two Brits award winner, Sam Smith confirmed that he had recorded the theme song for the next James Bond film, Writing’s on the Wall. The 23-year-old singer whose latest Album, In the Lonely Hour, has sold over 8.5 million times, sites Adele and Amy Winehouse as his main influencors. For the young artist it is an honor and a burden, being the first British solo male vocalist, since Tom Jones in 1965, to sing the theme song for James Bond. Already having secretly recorded the song in January, there is nothing else for him to do but to wait until the release, of the theme song on September 25th to see if he can live up to the tradition of success of his predecessors.

Spectre will be initially released on October 26th in the UK with the rest of the world on November 6th, 2015.

BMC vs. Sun: Focus Is Key