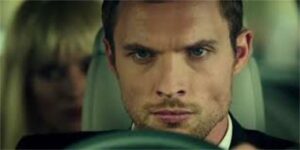 Unsurprisingly, The Transporter Refuelled hasn’t had a good start at the box office.

The story is simple: a guy with an English accent plays chauffeur in an Audi and has to beat up a load of really bad guys and gals on the way to his destination, without getting his suit spoilt. There isn’t much you can do about the car, it’s a car. So you are left with the guy in the suit who makes the difference.

Nothing against Ed Skrein but on one hand you have an ex-singer turned actor who hasn’t earned his horns yet and on the other, Jason Statham, an experienced martial artist who was a member of Britain’s National diving Squad, who at times earned his money on the streets.  Statham is convincing – every time he wins a fight you have the feeling that the guy knows what he is doing. Skrein didn’t even get a second chance as Daario Naharis in the Game of Thrones.

Now go and do the math.

I don’t know who makes the decisions in Hollywood but maybe they should spend more time watching their own movies than doing whatever else they are pretending to do.

Spectre, we have the theme and we have a poster