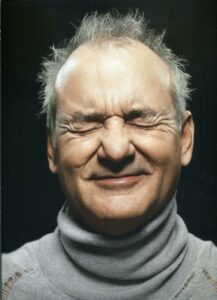 Bill Murray, who played the cynical Peter Venkman, Ph.D. in the original two Ghostbusters, wasn’t very keen on playing in the new reboot, directed by Paul Feig. Surprisingly, after months of denying any role in the making of the franchise’s third installment, a few weeks ago, he announced his participation on the project.

Rumor has it that Bill will not be playing Venkman in Ghostbusters 3, which is due for release in 2016, but a character who is out to expose the new, all-female crew played by Kristen Wiig, Melissa McCarthy, Kate McKinnon, and Leslie Jones.

In an interview with Vulture, Bill Murray explained how the casting of Wiig and McCarthy influenced his decision to join the cast, a decision that wasn’t made easily.

“I thought about it for a very long time,” Murray said. “Like, many, many months. No, that’s not right. I was seriously thinking about this for years, really … It kept eating at me, and I really respect those girls. And then I started to feel like if I didn’t do this movie, maybe somebody would write a bad review or something, thinking there was some sort of disapproval [on my part].”

It is a shame that he won’t be playing the charmingly sarcastic Venkman this time, but knowing that he will appear in any role will definitely attract a few more viewers at the theaters.

Smarthalo, smartening up your bicycle

Virtualizing the GPU the AMD Way