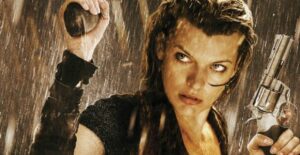 We’re still hoping that a great video game movie is around the corner, although one report told us World of Warcraft didn’t drive many wild at Comic-Con. (We’re still holding out hope for it though.)

While the Resident Evil movies aren’t stellar, they still bring out big audiences, and we’re getting the final chapter, hopefully, next year. Collider reports that Milla Jovoich Instagramed a photo of herself getting done up in make-up, saying, “It’s zombie killing season for the Jovoich-Anderson clan! I leave to South Africa tomorrow to start prepping for the movie!”

Resident Evil: The Final Chapter has a release date of September 2, 2016, and much like the last Rolling Stones tours, and the last Friday the 13th movies, we have the feeling there will probably be more Resident Evil’s in the future, especially considering some Hollywood executive will feel there should be a reboot to get it right.

Should We Know the Origin of Kayser Soze?

Self-driving cars may be safer than people-driven cars