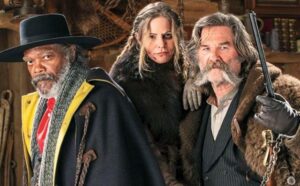 Along with every other big genre movie coming this year and beyond, Quentin Tarantino of course hit the Con this year, showing eight minutes of his new movie, The Hateful Eight, which hits theaters on Christmas Day. As usual, Tarantino had a lot to say, and one of the big revelations of his Con q&A is that he’s working with Ennio Morricone again, the famed composer ofrom The Good the Bad and the Ugly.

As we all know by now, The Hateful Eight will come out in selected theaters in 70mm, and as IGN reports, the footage he showed the audience showed a roll call of the characters in the film. IGN reports the movie had “something of a Reservoir Dogs feel, just in that they’re set in a couple of restrictive locations…the result is a sort of Dogs meets Django Unchained vibe.”

It was announced at Con that this will be Ennio Morricone’s first western score in forty years.

As far as the reaction to the footage, Wired feels the movie will be “the best cinematic experience of the year,” and they’re tremendously excited about the movie being made on 70mm. As The Wrap reports, Tarantino told the Con audience, “The thing I hate about digital projection is that it’s like watching HBO in public. But if that becomes the standard I can just go to television.”