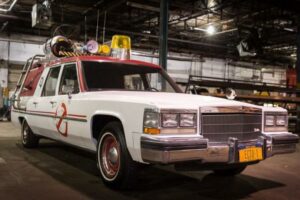 In the last several weeks, we’ve seen a number of photos from the new Ghostbusters shoot, including official photos from director Paul Feig of the ‘Busters costumes, the Proton pack, and now here’s the Ecto car.

You certainly can’t accuse the ‘Busters of abandoning their roots, and a lot of the classic tech and look of the original is certainly back. Feig let a picture of it out on Twitter with the hashtag #whattheygonnadrive. (Do these hashtags also mean the ‘Busters theme will be back for the movie as well? Hey Paul, #whatwegonnahear.)

Collider also tells us that the new Ghostbusters has just added a ton of cast members this week, including Andy Garcia, Michael K Williams, and Neil Casey. According to Deadline, Casey’s playing the bad guy, although we’re not sure if he’s going to be a demon bad guy, or just some schmuck who gets in the way of the ‘Busters.

We’re sure there will be more ‘Busters photos to come, there’s already shots of Melissa McCarthy in the costume on the net, and Feig is also wisely letting the Twitter haters hate, which is going to happen until people finally see the finished product, which considering how well Feig and McCarthy work together, it could have a good shot.

Han Solo Movie Officially a Go With the Team Behind Lego