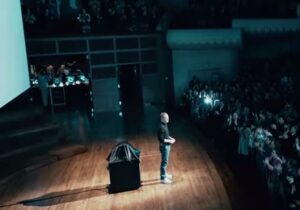 Relatively speaking, the major Steve Jobs biopic, simply titled Steve Jobs, had a pretty fast journey to the big screen, but it certainly wasn’t without its bumps in the road, including trouble nailing down the right actor to play Jobs, and a change in studios.

So now the first full length Steve Jobs trailer is here, and the movie looks like a knockout. The cinematography alone looks extraordinary, and it’s hard to believe the movie just went into production this year.

Reports told us that Aaron Sorkin’s screenplay for the Jobs biopic had three scenes, each half an hour long, which meant the movie would essentially be structured like a stage play. From the looks of the trailer, we get the impression more has been added to the movie, including scenes that were shot in the real garage where Jobs developed Apple.

As we’ve often said here at TG, trailers can be deceptive, although this trailer gives us the impression that this Jobs biopic’s gonna deliver when it’s released on October 9. Not to mention having seen more footage of Michael Fassbinder as Jobs, he actually looks like the guy now, hair, glasses, mandatory black turtleneck and all.

Why do developers pick iOS first over Android?

First Image From Ash Vs Evil Dead Is Here