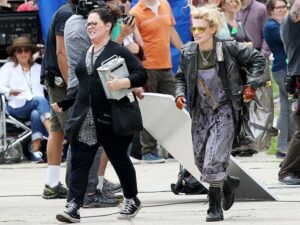 This story’s going to be a little shorter today, because a lot of times pictures scan speak louder than words. Indeed it looks as if Ghostbusters 3 is finally shooting in Boston, with Melissa McCarthy caught carrying around a ghost trap in her arms.

These shots got all around the net in a hurry, and McCarthy looks suitably nerdy while Kate McKinnon looks like she could easily be a female counter-part of Aykroyd or Murray. (We like the glasses, very Ghostbustery touch.)

There have also been rumors that like Star Wars, the OG ‘Busters could make some guest apprearances, and when Aykroyd was working on the script, the whole idea was to pass the torch to a newer team of spirit hunters.

Director Paul Feig coyly told People, “I know they [the original cast] are all happy about it but who knows, I’d love it but we’re figuring it out. We want to make it our own but also give nods to the fans of the movies.”

Again, mark your calendars for July 22, 2016, when the next Ghostbusters hits theaters.