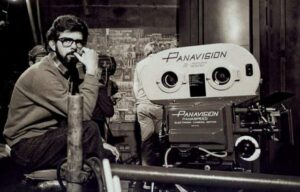 Film labs have closed all over the world, and by and large film will never be projected on celluloid again, but there are still directors making movies on film, including JJ Abrams with Star Wars: The Force Awakens.

The great irony here is Lucas pushed hard for hi-def digital video, and it finally stuck, but for directors who have the clout can continue to shoot on film, and now Collider tells us that Episode VIII will shoot on celluloid as well.

This is of course the movie that will follow The Force Awakens, which will hit theaters this December. While we know that movies are being projected digitally, the new Star Wars movies are indeed being shot on film, and Rian Johnson, who is directing Episode VIII, told Collider, he originally wanted to shoot in the ultra-big 65mm format, like the original Star Wars, but will shoot 35mm instead.

Like Christopher Nolan has done with the Batman films, parts of The Force Awakens have been shot in the Imax format. While we know that film is pretty much done, we’re glad there’s still directors working to keep it alive, and especially glad that the next Star Wars films will be on celluloid as well.