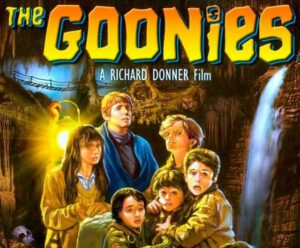 Many movie fans love the early Amblin’ films, and there are many great Amblin flicks to look back on and enjoy today. Back to the Future. Gremlins. And one of the most beloved fan faves today, The Goonies, which did good business in its initial release, and whose cult has only grown stronger since its release thirty years ago.

Thirty years? Jeez, yet another anniversary that makes us feel old(er). I can still remember the first time seeing Goonies, and how enchanted I was by it. It was based on an idea by Steven Spielberg, with a script by Chris Columbus, and was directed by Richard Donner, a hell of a combination of talent right there, but it also had a terrific ensemble cast with Sean Astin, Josh Brolin, Corey Feldman, Kerry Green, and more.

Some interesting facts about the Goonies, thanks to Mashable, include 900,000 gallons of water were used in the film, Richard Donner kept the pirate skull, which is a real human skull, Sean Astin got to keep the pirate map, which his mother threw away thinking it was just some useless piece of paper, and Sloth’s roving eye was operated by remote control.

Other facts, thanks to Entertainment Weekly, The Goonies was a hot set to visit, and Pee-Wee Herman, Dan Aykroyd, Harrison Ford and Michael Jackson all came down to check it out. Robert Davi, who played the villain Jake Fratelli, can also sing like a bird, and it was his idea to include his operatic abilities in the movie.

While it’s always great to pay tribute to the Goonies, this story does have a very sad note in that Mary Ellen Trainor, who played the mom in the film, has just passed away at the age of 62. Trainor was the first wife of Robert Zemeckis, director of Back to the Future, and she also had roles in Back to the Future Part II, Romancing the Stone, and all four Lethal Weapon films. Our deepest condolences to the family and friends of Ms. Trainor, and may she rest in peace.