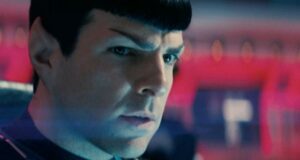 It’s had quite a few bumps in the road, but nobody’s abandoned plans for a third Star Trek movie, especially with the franchise’s 50th anniversary coming up next year. Already several writers and directors have dropped out of the project, and currently Justin Lin (Better Luck Tomorrow, Fast and Furious, True Detective) will be the helmer.

Lin recalled to Deadline that Star Trek was a big part of his life, his family used to watch it together on L.A. independent station Channel 13, KCOP, every night at 11. “My parents had this little fish and chips restaurant in Anaheim in the shadows of Disneyland, and they didn’t close until 9 PM. As a family, we didn’t eat dinner until 10 PM, and we would watch the original Star Trek every night at 11. My dad worked 364 days a year, only took Thanksgiving off, and from age 8 to 18, the only time I could hang out with my parents was by staying late. Every night, it was Star Trek on Channel 13 in L.A. That was my childhood.”

Where Lin had a year to get a Fast and Furious movie together, Star Trek 3 had a six month turnaround, “which makes it like an incredibly expensive indie movie.”

Lin’s excited to take on Trek, because the JJ Abrams incarnation still hasn’t gone on its five year mission, “so what we experience in the TV show hasn’t been touched on yet. That sets up an opportunity for exploration, and the deeper you go, the more you are examining humanity.”

While he’s mum on the plot details, the third Trek is a new, original story that won’t be a remake of a past episode. “It has been fun to focus on creating whole new worlds and species.”

The Dark Tower Has a New Director at Sony

First Inductees Are In For the Video Game Hall of Fame