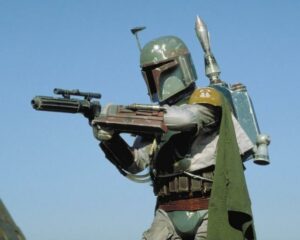 From the get-go, the word on the new Star Wars films was they would be part of an expanded universe, just like Marvel, with solo films along with the main series. There have been rumors of solo Han Solo, Boba Fett and Yoda movies, but could the Han Solo and Boba Fett movies be combined?

At first the news was the second Star Wars spin-off film would be a Boba Fett flick, and Collider, citing a site called Schmoes Know, tells us that the second film could be about the conflict between Solo and Boba.

As Collider continues, “This anthology installment will apparently take place between Revenge of the Sith and A New Hope.” A character rumored to be returning? Lando Calrissian.

It’s interesting to note that the second Star Wars spin-off film could include characters from Empire with Lando and Boba, and it would certainly be great to have them both back. And why have a Han Solo film when you can have him along for the party as well?

Guardians of the Galaxy Sequel Update