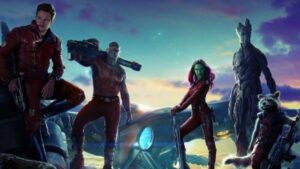 So Guardians of the Galaxy was the surprise hit of last year, which means everyone’s chomping at the bit for the sequel.Even though superhero mania has cooled a bit this summer, you know the fans will still be there for the next Guardians, win, lose or draw.

Gunn also said that following up the soundtrack to Guardians is important, even more than making sure the movie’s good. (He has no doubts he can make a better Guardians flick.)

As the Reporter points out, we should expect the movie to have a heavy subtitle, but again, the Iron Man flicks didn’t have any, and whatever the official title s, it will probably be revealed at Comic-Con this summer.

Look for the next installment of Guardians of the Galaxy on May 5, 2017.

Movie About Sony Hack in the Works

Will Han Solo and Boba Fett Make a Movie Together?