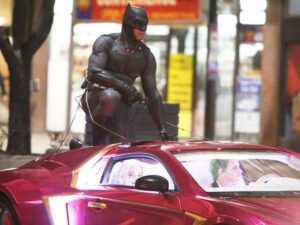 Already a scene from Suicide Squad has leaked onto the net, and we wonder if it’s been leaked on purpose. As we know with the big Hollywood studios, it’s smart to bring the geeks in instead of keeping them out. A leak on purpose could make it look like the geeks did it, and give a movie more potentially studio created studio cred.

With so many comic books movies trying to cross-pollinate with each other and crossover into each other’s universes, so of course Batman would probably make a cameo, right? Well, this is apparently what’s going to happen, because the news has hit that indeed the Dark Knight will be clashing with the Joker in the film. Makes sense, right?

As reported all over the net, there has been footage of a stuntman on top of a stunt car wearing a bat-suit, and as Yahoo reports, fans were camped out to watch the footage being shot in Toronto.

So will Ben Affleck play Batman again in Suicide Squad, providing connective tissue with Batman Vs Superman? Not sure just yet, but maybe Batman will be like the Scarecrow in the Dark Knight, making appearances here and there, or perhaps he’ll even more a more substantial role. Your guess is as good as ours right now, and we’ll have to wait until the release date of Suicide Squad, August 5, 2016, draws closer.