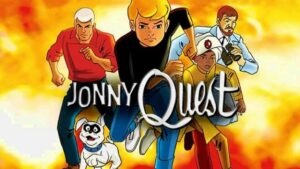 Back in the ‘90’s with El Mariachi, Robert Rodriguez showed he was a marvelously inventive filmmaker who could do a lot with a tiny budget, although many refuse to believe he could make a movie for $7,000 and he had to have more money to work with than that. Whatever Mariachi cost, it was a very clever film, and sadly Rodriguez has been making a lot of crap in recent years.

It’s been a while since we’ve heard of Rodriguez being attached to a project, and now he’s going to be doing the big screen version of Jonny Quest, which actually could be something right up his alley considering he created the Spy Kids series. Quest is of course the beloved animated cartoon from the sixties where a kid got into all kinds of great adventures, and again, this could end up being a good vehicle for Rodriguez.

As Deadline reports, Warner Brothers is making the movie with a rewrite from screenwriter Terry Rossio (Shrek, Pirates of the Caribbean), and at one point Richard Donner was going to make it, which would have been a good choice considering he gave us The Goonies.

So the question is, can Rodriguez deliver a good movie with Jonny Quest? If he can, maybe he can have a comeback and make a cool family film again, like the first Spy Kids. If not, he could end up spending the rest of his career making tripe, which would be unfortunate, especially for a filmmaker that showed so much initial promise.

Conan and League of Extraordinary Gentlemen Ready For New Reboots