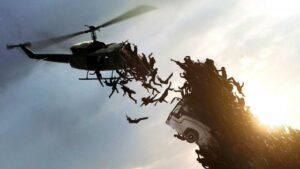 It’s been hard to think of a more troubled production in recent memory than World War Z. The last quarter of the movie practically had to be redone from scratch, and there was even gossip they were going to put it on TV.

Thankfully for Paramount, World War Z was a hit, and apparently did well enough that there will now be a sequel, World War Z 2, and The Wrap tells us it’s salted for a June 9, 2017 release date. This will put it in direct competition with the sequel to The Fantastic Four, provided the new edition of Four does well enough to get a franchise in motion.

While we’re curious and hopeful that the Fantastic Four movie will deliver, we’re also curious to see if zombies will still be hot, or if they’ll finally be played out by this point. We’ll have to check on this, but in addition, we’re wondering if Walking Dead will still be on the air, or if it will finally bow out after many successful years on cable.

Another interesting note on this for tech peeps, David Ellison, son of Oracle founder Larry Ellison, will be producing.

Chromebook sales on the rise

The Crow Remake Coming Together