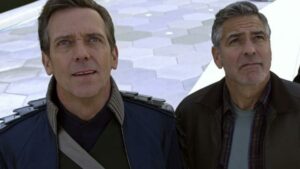 At first, we thought Tomorrowland would be an adaptation of one of our favorite areas of Disneyland, but the Brad Bird, George Clooney flick is something different altogether.

It’s an easy mistake to make with the Pirates of the Caribbean adaptation, and other Disney theme rides in the works to become movies, but the trailer of Tomorrowland reminds us a little bit of Lord of the Rings in the sense that it has a magical ring that takes the female protagonist and Clooney into some pretty wild worlds.

We also forgot to mention that Damon Lindelof, writer for Lost, wrote the script for Tomorrowland, and as he told Uproxx, he wants this movie to be a more optimistic view of the future. As much as he loves The Hunger Games and Terminator, “I want to watch it, but I don’t want to live there. The moral of the story is dystopia isn’t guaranteed to happen if you make no effort. And if you want a chance at utopia, you have to kind of make it happen.”

Brad Bird also told the New York Times, “Somewhere along the way, in the past 30 years or so, this optimistic belief that the future was going to be better slowly gave way to the idea that the future was going to be lousy. And we just wondered, why did that change? In discussing that, we noticed that the world’s fairs kind of went away around the time that that idea of the future went away.” (And indeed, the movie opens at the 1964 World’s Fair in New York.)

Tomorrowland opens on May 22, and we’re looking forward to seeing if Bird can create a wonderful, original new universe that will inspire more filmmakers to create new worlds that aren’t based on other movies, old TV shows or video games. Now wouldn’t that make a really promising future at the movies?

M Night Shyamalan May Have a Comeback With Wayward Pines

Planet of the Apes to Go to War