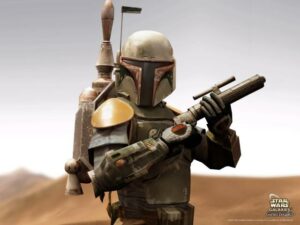 It’s such a tantalizing idea, even Joss Whedon would love to write it…How many Star Wars fans have been nuts at the prospect of a Boba Fett movie? Well, apparently it’s indeed coming to pass.

The Wrap tells us that the second Star Wars spin off film, the one that needs a director right now, will be the Boba Fett origin story. The movie will be in theaters in 2018.

The first spin-off movie will be Star Wars: Rogue One, which will be directed by Gareth Edwards (Godzilla), and as The Wrap tells us, the movie “follows a group of resistance fighters who unite for a daring mission to steal the plans for the Death Star…The next anthology film will explore the rich world of bounty hunters in the Star Wars galaxy.”

Rogue One will start shooting this summer, and it’s slated for a December 2016 release. As for the Boba Fett movie, we’ll be watching developments closely here at TG, and we’re also curious to see if the rumored Han Solo and Yoda movies will come to pass as well.

Avengers Age of Ultron is Huge…But Not the Hugest

Star Wars Toys Will be Out in September