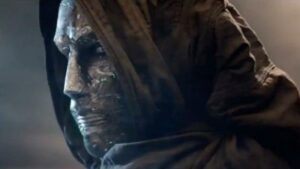 Last week, the full-blown trailer for The Force Awakened debuted, so did the first teaser trailer for Batman Vs Superman. Now two more major trailers have dropped this week, Jurassic World and Fantastic Four.

While a teaser for Fantastic Four was just recently unleashed, pictures were released to the net showing what The Thing looks like, and now we also get a glimpse of Doctor Doom, whose origin story is much different than the comics. (He’s reportedly a cyber terrorist in this one.)

One of the biggest challenges the Fantastic Four faces are its costumes, which can look pretty silly If they’re not done right. Doctor Doom could be especially troublesome, a guy wearing a hooded cloak with a metal face mask, but here there’s a few quick flashes of him, and that’s about it from what we’ve seen so far. (We do get a lot of The Thing and the Human Torch in the new one.)

And while we know dinosaurs can’t exist in the modern age, Jurassic Park certainly did a good job of suspending our disbelief, and the new trailer for Jurassic World gives us a lot of hope. The new trailer looks pretty kick ass, especially the helicopter crash into a domed roof that unleashes an aerial invasion from pterodactyls.

So so far, we’re pretty convinced that Jurassic World could be pretty hot sh*t, and we need to see more Four before we pass judgment, but we hope it can finally give this legendary Marvel team its due.

Daredevil For the Blind