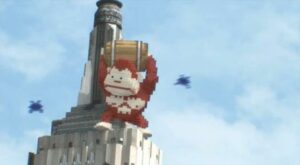 So we just did a story here on TG about Pixels, the new Adam Sandler comedy about aliens destroying the world with video game icons like Pac Man and Donkey Kong, and only Sandler and his team of gamer geeks can stop them.

Sandler’s stock has sunk pretty low in recent years, and his latest comedy The Cobbler getting horrible reviews, but there’s apparently pretty strong buzz on Pixels already because according to Variety, the trailer has gotten a record 34 million views. (This is also a record for any Sony film.)

One thing that’s clear from the trailer is the movie’s going for a Ghostbusters kind of vibe, and if it was anybody but Sandler starring, we’d be really excited about this movie, because it’s a pretty fun idea for a comedy.

While we have no idea how good or bad the actual movie is yet, many certainly found the trailer highly amusing, and there’s plenty of video game nostalgia out there that should give the movie at least some strong initial interest. Adam Sandler’s movies certainly aren’t critic proof anymore, so for his sake we hope that gamers will enjoy this movie in droves, and that it could actually be funny enough to appeal to bigger audiences too.

Why Didn’t Google Glass Take Off?