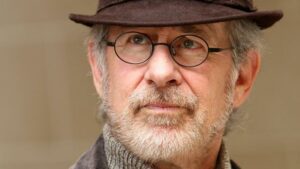 Disney currently owns the Indiana Jones franchise, but we’re sure Steven Spielberg can come back to direct any time he’d like, and he may indeed come back, according to some reports.

Chris Pratt is currently being eyed to take over from Harrison Ford, and as Collider tells us, Spielberg wants in if the script is good. (Funny, that didn’t stop him the last time…)

Spielberg has several other irons in the fire, including a movie about PTSD in veterans, and an adaptation of the Roald Dahl novel The BFG.

Raiders was such a huge movie, sequels were of course inevitable, but none of them have captured the magic of the first one. Crystal Skull of course was an all-time low for the series, even worse than Temple of Doom, but maybe if Star Wars can be resurrected, maybe Indy can too. When your last movie coins the new phrase for “jumping the shark,” (“nuking the fridge”), maybe there’s nowhere else to go but up.

Does the Joker Need to Be Fat? Jared Leto Chowing Down For the Role

4 Reasons Why HP’s Sprout is Not Just Another PC