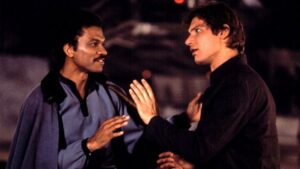 We all know by now that Mark Hamill, Carrie Fisher, and Harrison Ford are coming back to Star Wars, and Billy Dee wants in as well. Yes, he’s in his seventies now, but he’s still a dashing, handsome man, and he’d certainly love another go round as Lando.

He told Uproxx, “I have the feeling I’m going to show up. People think of me as the original cast, but I didn’t come in until the second movie. So I think they’re probably proceeding in that way. I can’t imagine them not bringing Lando back.”

Now remember, the upcoming Star Wars movies are sequels, not prequels, yet perhaps, as Williams speculates, they could bring Lando back once the second movie rolls around.

And perhaps there will be a younger version of Lando in one of the Star Wars spin-off movies, but we’re so used to Billy Dee as Lando, it would be hard to imagine someone else in that role, even if they get whoever’s the current African American sex god to take his place.

Could the Director of District 9 Revive Alien?