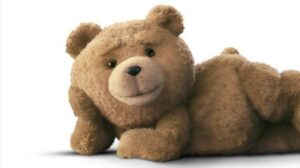 While I’ve always been a major Simpsons man, to today’s generation, it’s all about Family Guy, and we say congrats to Seth MacFarlane. He’s definitely a major creative force in the biz, and now he’s got a sequel to one of his biggest projects, Ted.

The first Ted came out in 2012, and it’s one of the biggest comedies of all time, raking in a world-wide gross of $594 million. A sequel was a given, and in Ted 2, it apparently has a Frank Capra, Mr. Smith Goes to Washington idea behind it. Ted gets married, he wants a kid but can’t have one because he’s a teddy bear, and he has to take on the system to prove he’s fit to be a dad and can adopt. (As the headline on Geek of Doom screams, “Time to Legalize Ted!”)

The trailer definitely made us laugh, and we’re sure it’s going to be pretty down and dirty, but can it stand toe to toe with the original? Can it be funnier? Can it give us a fresh new story without rehashing the original? All good questions that we’ll have the answers to this summer.

Binge Watching Could Be Hazardous to Your Health