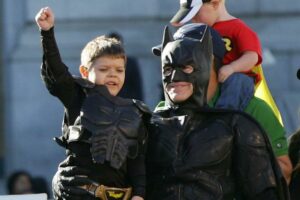 Last year, we’re sure you recall Batkid, aka Miles Scott, the young child who got to play Batman last year, thanks to the Make a Wish Foundation. It was a wonderfully inspiring story, and Christian Bale, Michael Keaton, and Ben Affleck all weighed in with how great it was for this kid’s superhero fantasy to come true. (Affleck even tweeted that he was the best Batman ever.)

Now the story of Batkid is going to become a feature film, thanks to Julia Roberts, who will produce and star in the film. Variety tells us this is going to be based on the documentary Batkid Begins: The Wish Heard Around the World, which just premiered at Sundance. We’re not sure who Roberts will be playing in the movie, obviously not Batkid, maybe his mom.

In a statement, Dana Nachman, director of the Batkid documentary, said, “It’s thrilling to me that Ms. Roberts and her team watched our film and were so moved by it that they want to dedicate their time and creative capital to make sure the widest audience possible will know and love Miles’ story and the spirit of this intimate special event that went global, as much as we do.”

The story of Batkid was a big inspiration to so many of us, especially here at TG, and we hope the Batkid movie will continue to inspire generations of people to come. We’re especially looking forward to seeing Batkid himself arrive at the premiere, and we’d love to see a big Annie Leibowitz photo spread in the Hollywood issue of Vanity Fair with all the Batmans together, from Adam West to Affleck, with Batkid front and center. Just a thought…