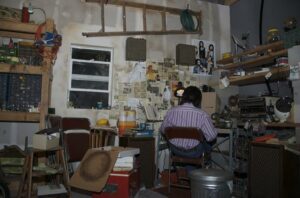 It’s hit some rocky potholes in the road, but it looks like the Steve Jobs biopic, which is now set to be made at Universal, is going forward, with Michael Fassbender playing the legendary icon of tech. And according to one report, this movie’s going right back to the source where it all began.

Collider tells us that the movie, which is being directed by Danny Boyle, has gone to the original site where Apple began, in a garage in Los Altos, CA. There was a report on the station KBCW, Night Beat TV, and neighbors were interviewed about the shoot taking over the neighborhood.

The report shows what the garage will look like, which will include motherboards, “70’s geek chic plaid thermoses,” and a reel to reel tape recorder. The neighbors mention that many come up and take pictures of the house Jobs created an empire in, and it’s a trip to see that this movie is going back to the actual place where Apple was born. The address, if you’re in the neighborhood. is 2066 Crist Drive, Los Altos, CA 94024.

Funny enough, in the local television report, one neighbor was hoping to catch a glimpse of the Woz’s big screen doppleganger, Seth Rogen, not Fassbinder playing big Steve. Good to see this Jobs flick is apparently now up and running, even if it’s shooting something as simple as a garage. No potential release date for the next Jobs flick yet, which is currently untitled, but reports have told us Universal is hoping for a quick turnaround to get the movie ready for awards season at the end of the year.

Star Wars the Force Awakens Will Go Its Own Way