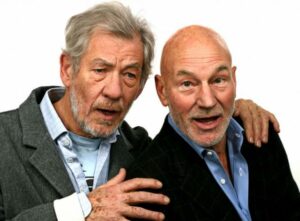 When the first X-Men movie was coming together, nobody knew who Hugh Jackman was before he played the hell out of Wolverine, but there was little doubt that Patrick Stewart as Professor Xavier was perfect casting. Now there’s reports that Stewart and Ian McKellen will both be leaving the franchise.

As Rolling Stone tells us, the next movie, X-Men Apocalypse, will focus on the cast that came aboard for New Class, which will leave the older Professor X and Magneto behind. Both Patrick and McKellen are of course fine actors, and this will definitely be a big loss.

At the same time, Stone reports that “the door remains open” for the actors to come back for the Gambit and Deadpool movies, as well as the movies that will follow X-Men: Apocalypse.

Jennifer Lawrence to Take a Dive