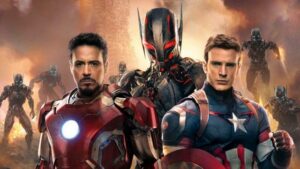 Not only does the next Avengers looks great, and not only does it look like it could be an even better movie than the first one, but it also looks like there’s going to be a much more complex and darker story this time around.

There have been hints in the press that the Avengers could even be fighting each other in this movie, and apparently there’s some truth to this, as you’ll see in the next Avengers trailer. Robert Downey Jr. says, “Everyone creates the thing they dread,” and there’s shots of Iron Man battling the Hulk, as well as Thor holding Tony Star up by his neck.

Perhaps with Whedon coming off a Shakespeare adaptation, Much Ado About Nothing, he wanted to bring more Shakespearian themes to The Avengers. Or maybe as we’ll see with  Batman Vs Superman, maybe you’ll come out stronger as friends after a big brawl.

Whedon told Celebrity Café that he described the team in Ultron as “strong but damaged by power. [It] describes every person in this movie. It may, in fact, describe what the movie is about. You know, the more power that we have the less human we are.”

Avengers Age of Ultron hits theaters on May 1.

The world’s greatest bathtub must be seen to be believed

Will These Women Lead Ghostbusters 3?