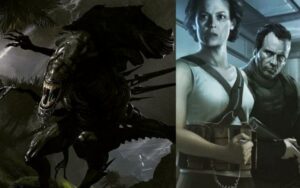 Neill Blomkamp was up to direct a very big movie, Halo, which didn’t come to pass of course, but it lead to District 9, which established him as a hot new talent in the biz.

Blomkamp followed up with the lackluster Elysium, but they can’t all be winners, and we’re sure he’ll have another good movie down the road. Now reports are surfacing he may have been up to direct another Alien movie, which is definitely an interesting director choice that could have infused new life into the franchise if handled right.

Illustrations for Blomkamp’s ideas have been put on the net, and Blomkamp said that the studio that owns the Alien franchise, Fox, wasn’t aware he was working on this. So nobody’s quite sure at the moment what all this is. Was Blomkamp doing cool Alien art in his free time? Was he hoping to pitch a new Alien movie? Will he hope that this will bring Alien back?

Judging by the art we can see on the net, we think Blomkamp could make a great Alien movie, and we hope this could actually spark a Blomkamp Alien movie. It would probably be the first time a movie would be launched by fan art, but always remember what really sold Alien was the H.R. Giger art, which created sci-fi monsters and worlds that have never been seen in sci-fi before.

Transformers 4 is Tops in China