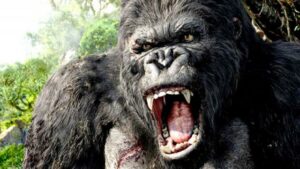 While Peter Jackson’s King Kong wasn’t the ginormous blockbuster many had hoped it would be, it did big business on DVD, and it was a well done homage to the childhood favorite that inspired him to be a filmmaker.

So now there’s a new Kong movie in the works, Skull Island, and according to reports it’s coming out in March 2017. Originally it was going to hit November 2016.

As Variety tells us, Skull Island will be in 3D, and John Gatins (Flight) and Max Borenstein (Godzilla) penned the screenplay, which as the title tells us takes place on his home land. We’re not sure if this will be a period story or take place modern day, or take place in the Kong universe that isn’t a sequel or prequel.

Usually when Kong veers away from the original story the results aren’t that great, although something like a King Kong Vs Godzilla can be fun if it’s taken in the right spirit. A visit to Kong’s island in 3D could indeed be fun, so maybe the big monkey’s ripe for a reboot again.

FBI hot (or not) on the trail of Sony hackers