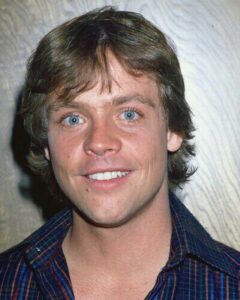 So the Star Wars trailer is out in the world, and fans are very optimistic about the next installment, which hits theaters next December. While we’re cautiously excited about the movie, Mark Hamill is really excited to come back.

As we’re sure you know by now, Hamill, Harrison Ford and Carrie Fisher are all returning for The Force Awakens, and as Hamill told Variety, “I get the chills,” although he admits he’s not crazy about the beard he has to wear for the film.

“That is what I call my contractually obligated beard,” Hamill added. “But face foliage is almost a part of the costume…it makes a statement that they wanted to make, and I’m more than happy to oblige them.”

While Lucas wasn’t interested in the new Star Wars trailer, Hamill said, “The great thrill for me was watching the video of fans watching the trailer…I forget how happy this stuff makes a certain segment of our population. I really was moved to see these people that happy.”

We’ll see if bringing the past back to the future with Star Wars will work next year when The Force Awakens is out in the world next year, and again, we’re cautious, but optimistic about all this, and are hoping for the best.

The Godfather of Games

Apple Hires Stella Lowe To Take On The Impossible

David Schmidt of LifeWave: How the Patent Process Supports Innovation