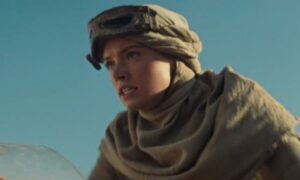 While we were sure that there wouldn’t be Star Wars details getting out there for a long time, the trailer was finally unleashed before thanksgiving, and fans all over the geek-o-sphere are very optimistic about the saga’s future.

So now some more details have gotten out there, this time it’s character names, and they leaked through one way you wouldn’t think they would in a million years: through bubblegum trading cards.

We know there’s going to be a ton of merchandising for the next Star Wars film, that’s a given, and funny enough, we can remember when there were trading cards for movies back in the ‘70s, just like for sports teams. (You can still get them from collectors, just make sure you don’t eat the gum after all this time.)

So if you want to know who the characters are in the trailer, the guy in the dark forest with the new lightsaber is named Kylo Ren, the girl on the landspeeder is named Rey, the brother in the stormtrooper outfit in named Finn, the beach ball robot is BB-8, and the guy fling the X-Wing is named Poe Dameron.

We’re not sure how these cards got out into the world, or how this leak could have happened, and we’ll certainly be very cautious about potential spoilers in the future here at TG, because who wants to be a d-bag and ruin the surprises and fun?

Look for Star Wars: The Force Awakens in theaters on December 18, 2015, which as Vulture reminds us is only 372 days away.

Amazon vs. Sears: Why I Don’t Recommend Sears This Season

Sony Hack Could Have Happened to Many Other Companies