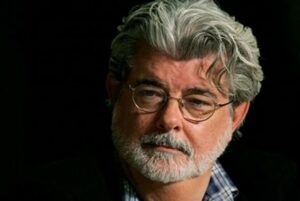 The other day a news item hit that really piqued our interest, then we found out it was a joke. It was about George Lucas’s reaction to the Star Wars trailer, but it turned out it was a parody hoax from Funny or Die that was indeed quite funny.

Star Wars has been parodied since the beginning of the franchise with the short subject Hardware Wars, which is reportedly Lucas’s favorite take-off on his most famous creation, and the Funny or Die parody was also good fun as well. But what does Lucas really think?

His answer is typical Lucas. As Esquire reports, Lucas claimed, “I don’t know anything about it. I haven’t seen it yet.” Okay, now who believes that? If Lucas is unaware of it, he’s one of the few people on planet earth who is, especially considering this is the franchise he created.

Lucas has been famously pessimistic throughout his life, and he also claimed he’s “not really” curious to see what JJ Abrams has done with the franchise. Is he being quoted out of context? Did he just have no interest in talking to this reporter? Or is he bitter that Star Wars is moving on without him?

Hard to tell with Lucas, he’s often hard to read, but we hope he can be happy with where his franchise will be headed into the future. His kid has finally left the house, and it will be a huge success, so we hope Lucas will be proud of seeing his offspring doing well in the world without him.

The one security flaw we can’t fix – our own stupidity