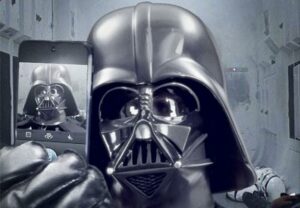 You knew that when the Star Wars teaser trailer that the net would explode with comments, parodies, theories, and more. As it turns out, as this story was being finalized, a whopping forty million people have seen it in less than 72 hours.

Among the parodies that hit the net are a Lego version of the trailer, as well as a goof where the trailer was redone as if George Lucas directed it. Net parodies are also a given in today’s day and age, and any Star Wars fan knows about Hardware Wars, which played in theaters as a short subject in the late seventies. (It’s also Lucas’s favorite Star Wars parody.)

By and large, fans are very giddy with geek excitement over the Star Wars trailer, and there’s definitely a lot of hope that Star Wars can be resurrected. We’re certainly keeping our fingers crossed that we’ll be blown away next year when The Force Awakens opens on December 18, 2015.

The Hobbit Battle of the Five Armies Reviews Are In