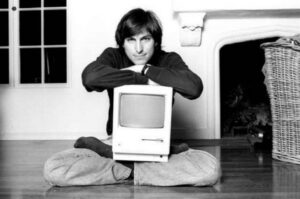 While there’s still no word on who will be playing Steve Jobs in the upcoming Sony biopic of the tech giant, like any huge movie in development, things are top secret, especially the screenplay, which was written by Aaron Sorkin.

As we’ve reported here before, there’s all kinds of ways to keep a script a secret, and sometimes extreme measures are important in the age of the internet. So according to The Hollywood Reporter, the Jobs script is being kept a secret by fooling actors that they’re performing from it, but they’re really reading from another Sorkin project.

This report tells us that people auditioning for Jobs are actually performing scenes from the Sorkin series The Newsroom, which is having its last season, although we wonder if they did this with Christian Bale, who up until a few weeks ago was going to play Jobs.

Many times, even with the biggest stars, you have to read the script at the studio and are not allowed to take it home. This might have started with Star Wars Episode One, where Lucas had the only copy, and you had to travel to his office to read it. (The same thing was done with Steven Spielberg’s A.I., and Spielberg has always been extremely good at keeping his scripts top secret).

We’re still hoping the Jobs movie will be coming together soon. At last report, Michael Fassbinder was going to take the place of Bale, still no official word on this yet, but we’re sure it will make big news when it is indeed official.