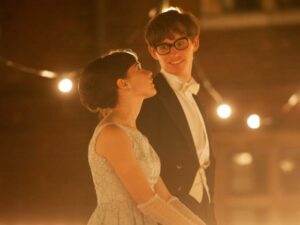 The Theory of Everything comes in during an interesting time at the box office. Theory went up against two major films competing for the number one spot, namely Interstellar and Big Hero 6, except the Stephen Hawking biopic is playing a smaller, art house style limited engagement, which is a much smarter way to open a movie like this.

And how did it do in limited run? Great, The Wrap reports, especially considering it’s only playing on five screens, grossing $41,400 per theater. The Wrap tells us this makes it “the fourth-best limited debut this year after The Grand Budapest Hotel, Birdman and Boyhood.”

This is how a lot of prestige movies opened back in the ‘70’s. Start out in the major cities on a smaller number of screens, then spread out to the suburbs and the drive-ins. A smaller movie needs more care in growing, and it would be stupid to open a Hawking bio on thousands of screens up against a Disney movie, or a major potential blockbuster. (The plan is to open Theory wide by Thanksgiving.)

Hawking was shown The Theory of Everything, and he gave it his approval by shedding a tear during the screening and calling it, “Broadly true.” There’s also strong Oscar talk for Eddie Redmayne, the actor playing Hawking, and the exit polls tell us that 60% of the people going to the film are female, because as Focus Features explained, Theory is “a tremendous love story” as well.

Despite Drummer’s Arrest, AC/DC Vow to Hit the Road