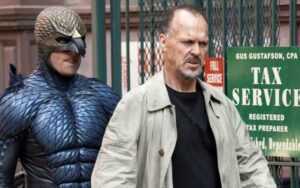 The buzz is strong for Birdman, the Michael Keaton film about a has-been former superhero. Keaton is a terrific actor, we’ve always dug him, and it’s good to see him back after what felt like a long absence.

Now Variety has posted an opinion piece that Keaton could be “the actor to beat” at next year’s Academy Awards. Movies that are getting strong buzz so far are Steve Carell’s serious performance in Foxcatcher, and Benedict Cumberbatch for the upcoming Imitation Game. But is Birdman truly Oscar worthy?

Again, the movie’s gotten remarkable reviews, and it reportedly got a standing ovation at one festival showing. It is indeed what Variety calls an “offbeat” choice, maybe “dark horse” is a good term for it too, and it could be a little movie that could next year.

It’s also bizarre to think that Keaton is the oldest potential nominee as well. He’s sixty three, and he’s never been nominated for a little gold guy. Whether he wins, or gets a nomination, it’s just good to have him back and still going strong.

Gillian Anderson Wants In on Ghostbusters 3